When Jasper and Lilah first came to live with us, they were nearly the same size, though Lilah was a month and a half older than her “brother.” Those additional weeks--and the maturity that came along with them--allowed her to outwit and outmaneuver Jasper, and enabled her to show her alpha side. As they got older and Jasper began to outweigh her, he began using his size as an advantage, playing a little rougher. It was no longer Lilah always chasing Jasper; sometimes it was the reverse. I think Jasper still thought of himself as the “little brother,” though, and would acquiesce to Lilah’s demands, dropping a Frisbee instantly when she came running after him, or giving up the ball that he--and his long long legs--had painstakingly retrieved from all the way across the yard.

Siblings in perfect balance
There was a balance between the two of them. They obviously loved each other, and got along well. Lilah’s favorite way of showing affection toward her brother was to clean his ears. At first he would floppity his head and get up and walk away, annoyed. But over time, Miss Persistent Lilah would try and try again, and eventually, Lilah could clean Jasper’s ears and he would lay there with a pleased and blissful look on his face, enjoying the attention. 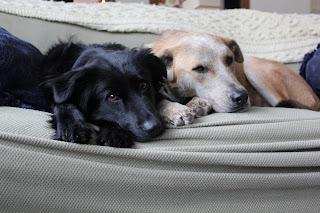 When there were two...Jasper and Lilah snuggling on the couch.
Rarely was there an argument between the two dogs; there were only a few play growls when tugging toys between the two of them. And that was a recent development; in the past, if Lilah wanted a toy that Jasper had, she would either simply take it, or distract Jasper with another toy, enticing him to drop the one she wanted and to go for the one she had. It worked every time.

And then came Tucker. 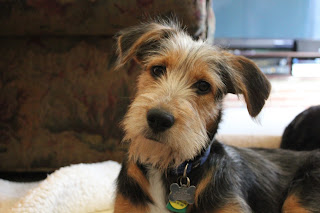 Himself: Mr. Tucker
The power shifts when puppy makes three
The balance of power was toppled when the stable shared relationship of two had to adapt to number three.

If you had asked me a month ago who was the alpha in the Lilah / Tucker pack, I would have said Lilah. She out-thought Jasper. She could stare him down. She could make him drop a toy just by looking at him.

Today, though, it’s Jasper who is in charge. Paws down. The dude. The comfort hound. The dog who finds standing a chore and has to lean his long lanky body against a wall because his lengthy legs just get so tired holding up his body.

It was a fascinating transition to watch. Like something in a NatGeo or Nature program, where you’re watching a wolf pack or a pride of lions. I could hear the voice over in my head: “Watch how the alpha stands over the rest of the pack members to show his dominance.” Only these were my dogs, and it was all unfolding in front of me.


The new dog enters the picture
It began the minute Tucker entered our yard. Jasper and Lilah, while used to other dogs visiting, instantly knew this dog was different. When we brought Tucker home, Brian, Corinne and Aaron had let Lilah and Jasper into the back yard, before I brought him in. The dogs sniffed everyone top to bottom, and could smell The New Dog on them. So when I brought Tucker into the back yard, it was That’s Him!

Jasper’s hackles went up instantly; I hadn’t seen them in months, when he was still quite young and couldn’t quite control himself. And he started playing with Tucker--really, really roughly. Then Lilah joined in, and while it looked like play at first, I could tell that some serious messages were being delivered. This is Our Yard. These are Our Sticks. This is My Brother. This is My Sister. These are Our People. We are In Charge. 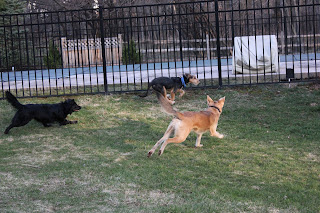 The chase: Jasper and Lilah give the little guy some aerobic exercise.
Now Tucker thought it was all fun--even as he was doing somersaults when Jasper body checked him. He would hide behind a shrub when he felt it was a little rough, but would gamely run out to play after a quick breather. 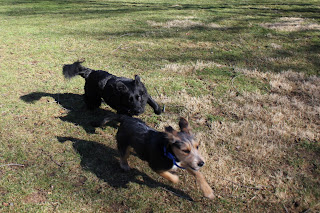 Lilah fast on Tucker's heels.
There was no animosity. No anger. No bullying. Just dogs explaining the playground rules to the new kid. 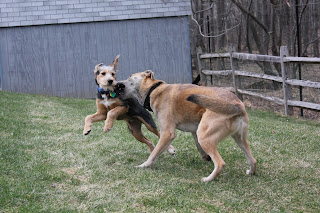 It looks like Jasper is about to take a chunk out of Tucker, but Jasper is very measured in his play bites.
At first it was difficult to watch. I felt bad for Tucker when he would go tumbling head over tail. But he didn’t seem troubled. And I couldn’t understand why friendly, easygoing Jasper was being so hard on the baby. So I would step in and break it up when I thought the play was a little too rough.

And then it came to me; Jasper was making a play for pack leader, now that there was an actual pack, instead of just him and his sister. And the best thing I could do for Tucker was to support Jasper as leader, giving him the confidence that he was the acknowledged alpha, so that he didn’t feel he had to work so hard to prove it.


Jasper takes the lead
So that’s what we did. I--and everyone else in the family--began to treat Jasper like he was truly the Leader of the Pack. We greeted Jasper first when we came into the house. Jasper got his treats first, he went out the door first, he got fed first. With our actions, we were saying, “All hail Jasper, his Dudeness, the Alpha Dog.”

And it worked. Within a day or so, Jasper visibly slacked off on his roughness with Tucker. His hackles showed up less and less. The tone of play relaxed dramatically. And then Tucker finally got the message and began to learn appropriate puppy manners. He showed belly when Jasper got rough--and Jasper would ease up instantly. Tucker would approach Jasper low and slightly submissive. He would lick Jasper’s muzzle, and snuggle up to him. 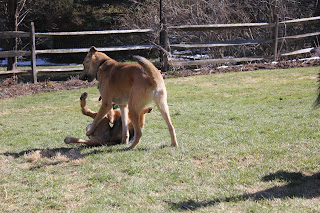 Tucker gives belly to Jasper.
Taking lessons in doggy manners
Inside the house, there were additional lessons to be learned. Do Not Take Jasper’s bone. It is Jasper’s. Do not put your nose in Lilah’s food bowl. It is Lilah’s. And all the cute bellies in the world won’t really change that. I watched as Tucker would sidle up to Lilah, doing a wormy slinky crawl, roll over and try to put a paw on a toy or bone that was currently in use and spoken for. Lilah would freeze and growl. Tucker would wiggle. The growl would get more intense. So would the wiggling. Until eventually, Tucker would wiggle too much, and Lilah would bark loudly, and Tucker would suddenly change his mind and decide another bone was best. For now. 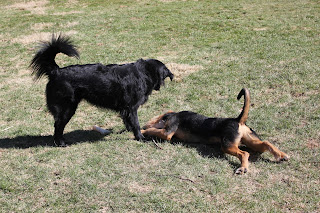 Tucker is doing the low crawl, aiming for that bone you see underneath Lilah. 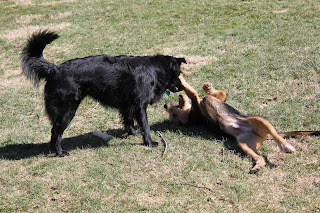 Now he's trying the belly roll and the gentle paw on the face. 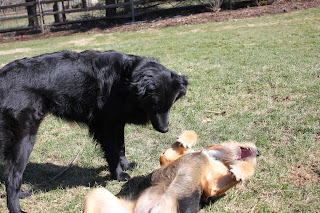 Tucker's last, desperate ploy: Total Belly. Lilah seems a bit puzzled, but not impressed.
Once, Tucker and Jasper were playing tug. Except it was with Jasper’s favorite toy of the moment--a stuffed emu--and Jasper really didn’t want to tug. He just wanted the emu. So Jasper growled at Tucker, who thought, “Cool, we’re playing growly tug,” and promptly growled back. Jasper growled, “No this isn’t a game. I. Want. My. Emu.” To which Tucker promptly growled back and tugged harder. Finally, Jasper opened his mouth and let loose an enormous bark that not only startled Tucker into letting go, but startled the barker himself, and Jasper laid down, stunned at the loud noise he had produced. He lay there quite puzzled and unnerved, with the emu between his front paws. Lilah the Peacemaker walked up to her brother Jasper and licked him on his face, nuzzling him and cleaning his ears. “It’s alright, Jasper. You’re okay.”


And then Tucker took the emu. 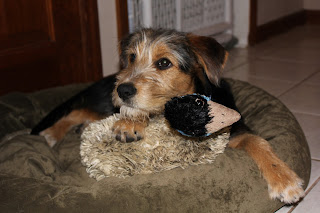 Tucker claims the emu as his prize.
Sweet Lilah steps up and teaches a thing or two
Lilah, for her part, quickly understood that Jasper was in charge, and immediately stopped taking balls and Frisbees from him. She was totally cool with The Dude in charge. She was completely supportive. But then she had to figure out her status with the pup. And Tucker, who was only ten pounds lighter than her, is a persistent little pest. Lilah has had to growl him away from her food, her toys, her bones. She’s learned to use her ten-pound advantage and slam him when needed in a game of chase. And just a few days ago, Tucker started letting Lilah clean his ears. Acceptance. Friendship. Love. 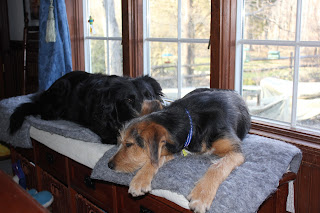 Lilah cleaning Tucker's ear.
Today, everyone seems to have settled into their places. Tucker still tries to weasel a bone or a toy away from Lilah and Jasper. And he loves to nibble and gnaw on his older siblings. I’m amazed at how tolerant they are of his mouthiness. But watch them all together, and you see genuine affection. Lots of muzzle licks all around. All three dogs tend to sleep either on or near each other. And in the morning when Tucker is let out of his pen, Jasper and Lilah gather around to sniff, lick, nuzzle and wag their greetings. 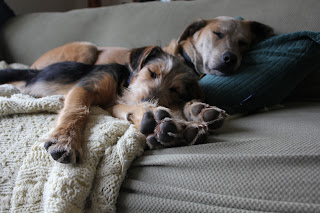 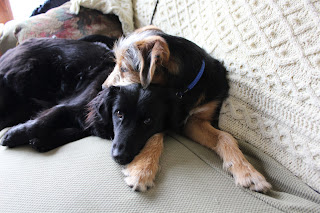 Snuggling his sister.
A pack of our own: Jasper, Lilah and Tucker
I love watching the interactions among the three dogs; I’ve seen Discussions and Negotiations that didn’t take place when I only had two. Jasper has increased his confidence, and is a wonderful, fair and surprisingly effective leader. I never would have expected it. He steps in if Lilah or Tucker are too rough with each other; he will let Tucker take his bones and toys now and again, as an obvious benevolent act. He’s more affectionate with Lilah now, and she’s loving it. As for Lilah, I have a feeling that when Tucker gets older, he’ll take a place above her; his personality is a bit too strong, I think, to stay on the bottom rung. But I don’t think Lilah will care, as long as she has someone to play with, and ears to clean. 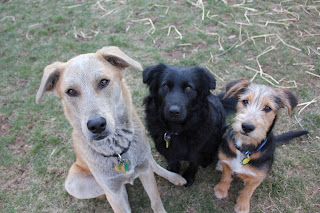 A trio of Cute.

Posted by Life with Dogs and Cats at 6:46 PM