Getting to Know Tucker, Part II: Tucker and His Furry Family

It's amazing to watch the relationships among all the animals in our family change and adapt as Tucker finds his place. There is genuine affection from Jasper and Lilah toward him. And Tucker simply adores his older brother and sister. The cats have come to realize that this new dog is part of the pack and have begun to accept him. There have been occasions of mutual sniffs, but also a few hisses and slaps. That said, Dawn and Athena now feel comfortable enough to take a nap in close proximity to The New Dog, and have even been caught rubbing up against him, though, to date, they both insist it was a case of mistaken dog identity. 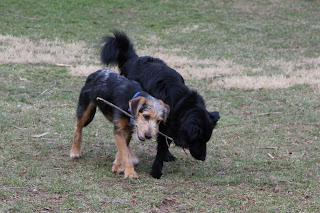 Often there are Discussions on whose stick belongs to whom, but sometimes it's okay to share it. 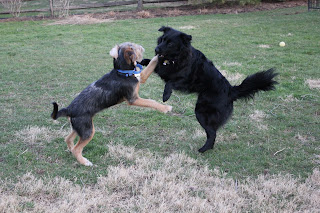 Lilah and Tucker can seem to be evenly matched, but really Lilah is taking it easy on him. She can body check Jasper and knock him off his feet if she wants. 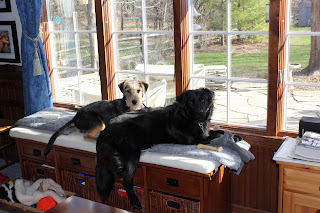 Tucker learns quite a bit by watching his big brother and sister. Lilah has shown him the best place for watching birdies. 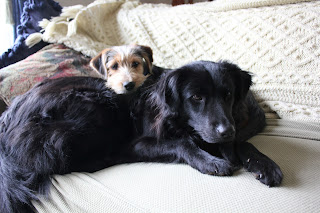 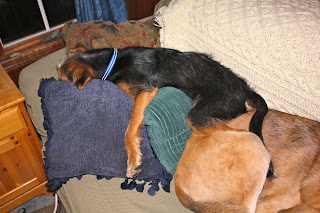 And sometimes a brother is a good pillow, too. (That's Jasper's back on the right.) 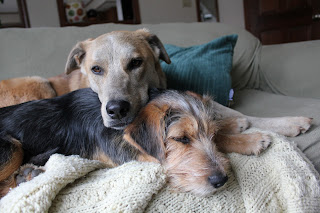 Tucker is happy to reciprocate. 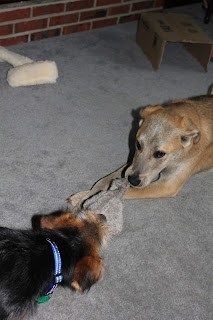 Jasper is a great tug partner as well. Except when he Really Wants His Elephant. And then he lets Tucker know about it. And then Tucker finds a new toy...temporarily. 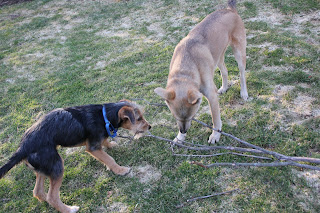 It's also fun to chew sticks with Jasper, because he likes Big Sticks. If Jasper does something, it's probably Fun, and Tucker loves to do what his big brother does. 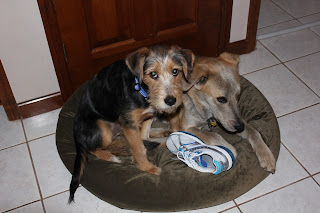 Tucker found a new toy and brought it to Jasper so they could play with it together. Jasper's face tells the story: "That is Not a Toy. We're gonna get in trouble..." 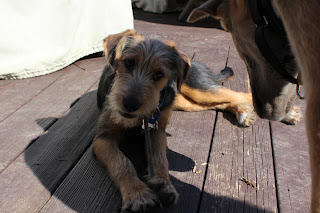 Tucker in his brother's shadow, but temporarily. 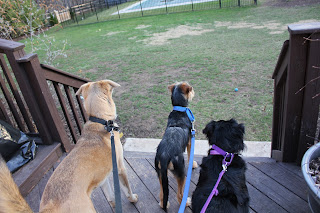 The trio do quite a bit as a unit. The rule here is to stop at the top of the steps... 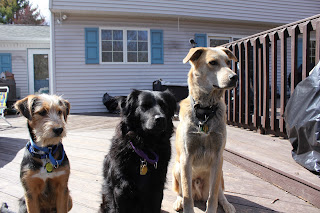 ...then sit quietly while I take off the leashes. Nobody moves until they are told, "Okay!" 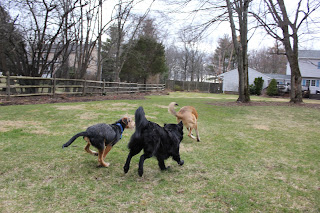 Tucker, Lilah and Jasper run a merry game of chase when they're outside; most often it's hard to tell who is chasing whom. 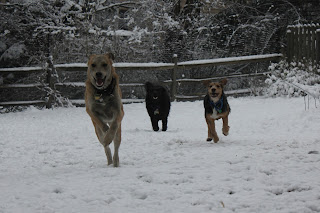 But they all come running when called. Those smiles are genuine, not photoshopped. 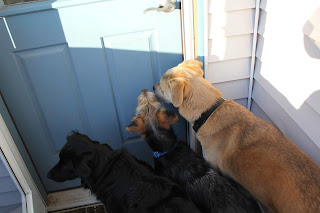 When it's time to go back in the house, all three gather by the door. 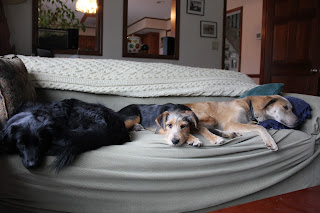 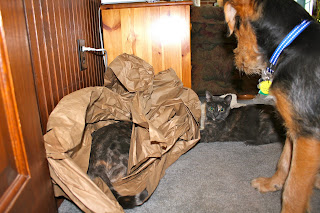 Tucker tries to understand Dawn and Athena. He is completely puzzled over why crinkly brown paper is just so darn exciting. Actually, so are the rest of us. 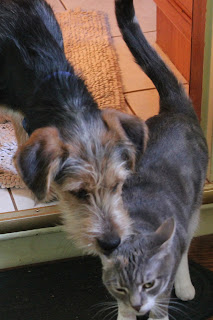 Tucker is learning to use a gentle touch with the cats. Dawn will tell you he hasn't perfected it yet. 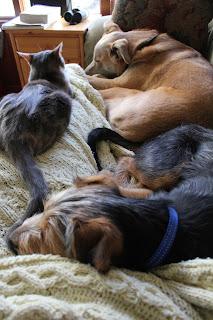 But that doesn't stop her from snuggling on a blanket when it's nap time.
Posted by Life with Dogs and Cats at 6:16 PM