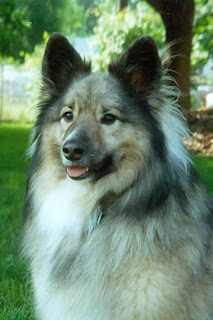 As with all our dogs, Pasha came to us from a shelter. One of my work colleagues had found him wandering in a park in Somerville, New Jersey. After confirming that all the neighbors didn’t recognize him, she brought this large ball of fur back to our dog-friendly office in town, where everyone fell in love with him. Assuming he must belong to someone, she drove the dog to the Somerset Regional Animal Shelter, where he was to stay for a week, in case someone claimed him. Unfortunately, my work friend couldn’t adopt him, as she already had 3 dogs. At the time, only Kelsey, our sheltie / shepherd mix, lived with us, and it seemed like this new dog came into my life at just when I needed him. It became obvious to everyone that he’d be coming home with me, if it turned out nobody came looking for him. I called the shelter every day to see if he was still there. 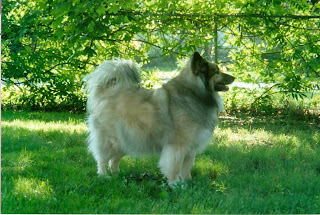 The dog was a keeshond mix. Having seen him only briefly when he visited the office, I kept thinking he looked just like a teddy bear...and somehow he felt especially Russian. He had long silky fur that was black and tan and white,with shades of all three running through. His tall, point ears sat perkily on top of his head. And a very long-haired tail curled over his back with a jaunty flair.  As coworkers asked me what I might name him, I would answer, “Pasha.” It’s the first Russian name that came to mind.  But I wasn’t sure, I said. I’d know what to name him once I got him home. 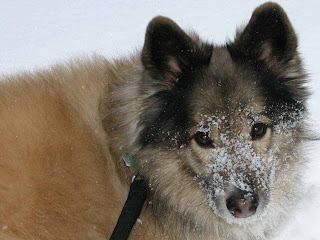 The first moment he was available for adoption was in the middle of the work day, so with my company’s approval, I was there to pick him up and bring him, once again, to the office. Within minutes, everyone came to say hello. “Hi Pasha!” “Here, Pasha!” “Pasha’s a good boy.” By the time 5:00 rolled around, he was, already, Pasha. 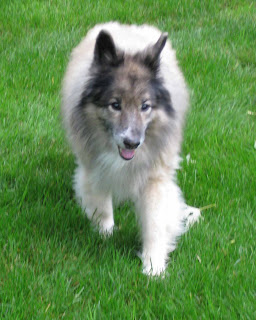 We didn’t know anything about Pasha’s life before he came to live with us. At first, he cringed when we moved our hands near him, and was afraid of squeaky toys. Mr. Pasha didn’t really understand any toys for that matter, and didn’t know how to play with them. One pet sitter reported that when she threw a ball for him in the yard, he looked at her, looked at the ball, and then trotted over to where it landed and promptly lifted his leg to christen it. “Here’s what I think of your silly game.”  When Rosie, our terrier mix, joined the family, she gave Pasha a great gift by teaching him how to play; he learned to romp and run with her, and even tried playing with some of her toys now and again. 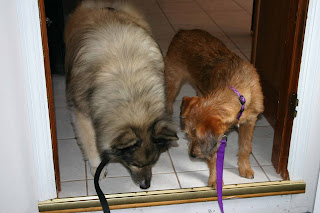 Pasha was the most affectionate dog I have ever known. He loved to Snuggle, be petted, and Snuggle some more. He would bury his head in your chest, sometimes climbing haflway into your lap for the hugs. And he mastered the art of getting pets from any one any time. His modus operandi was to look up at people with the most sorrowful expression, his ears pointed expectantly, and gently nudge his intended petter. As soon as the person touched him, he would lean into him or her, and look up with such unabashed gratefulness, that his victim...er...visitor was sure, just positive that this dog is completely ignored, is never loved, and lives a life of complete neglect. Another sucker! Everyone, everyone he met, would fall for Pasha’s scam. 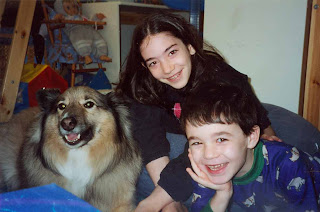 Pasha was a creature of habits. Every day the members of our family were greeted with a Morning Sniff. “Sniff sniff, sniffy sniff sniiiiif.” Pasha would inhale long draughts of each person’s scent, always ending with an exclamatory, “SNIFF!!!” You could also set your clock by Pasha, as he always knew when Dinner Time was; at 5:30 on the nose, the dog would start pestering and dancing, pacing and making horfing noises. He would generally make a nuisance of himself, getting in the way of anyone nearby until someone realized it was Time to Feed the Dog. A keen observer of patterns who also understood a wide range of vocabulary, we learned not to say the word, “outside,” or even spell it, or Pasha would be on his way. We had to say things like, “I think I’ll take the furry creatures on the other side of the door.” 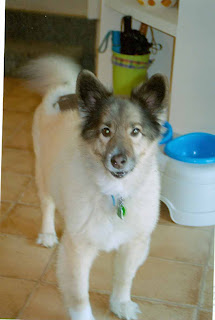 His Keeshond heritage gave Pasha black eyeliner marks around his eyes.  My daughter Corinne called him Emo dog; combining his doggy mascara with his pointy, expressive ears, Pasha could emote pathos at the drop of a biscuit. He was so good that we coined a verb:  to ears. As in, “Pasha is earsing at me; he wants my cookie.” And, when my children really wanted something, they’d put their hands on top of their heads in imitation of the dog, cocking their heads, “Please, Mom?” Hey, it worked for Pasha.  Even my kids knew how to ears. 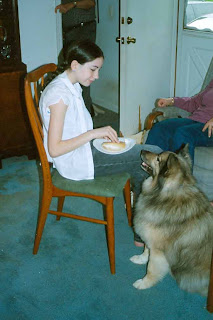 Pasha’s long silky fur was beautiful, and nearly everyone who met him thought he was a very pretty girl.  I don’t think he minded as long as there were Pets involved. Apparently Keeshonden (plural of Keeshond) have a double layer of fur, and Pasha certainly had at least two layers. He had bedroom slipper feet, which Corinne dubbed “wissle fuppy swippers.”  I had to trim them often so we could see his toes every once in a while. 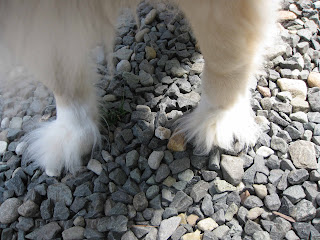 In addition to Snuggles and Pets, Pasha also loved food--of any kind. His definition of food was rather broad though. If it had a scent, it was edible. Didn’t quite matter what kind of scent. Deer poo (we live near a wooded park) was a delicacy. Crabapples were a crunchy snack. Corinne’s lip gloss; hey it smelled like strawberries. In his search for such delicacies, Pasha left no log unturned, no bit unsniffed, no garbage can unexplored. We resorted to closed doors and put lids on all the trash receptacles in our home. Always an opportunist, Pasha figured out how to stick his head through the swinging lid on our trash cans.  Once, there must have been a particularly alluring item, and Pasha stuck his snout in just a little too far, and he came away with a new type of dog collar; the trash can lid was stuck around his neck. He came prancing into the kitchen later; I swear his expression was, “Trash can? Lid? What are you talking about?” 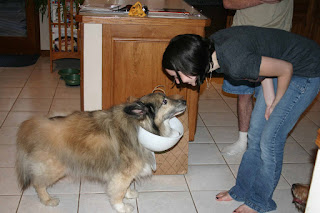 His love for Sniffs of any kind let to several adventures. An encounter with a skunk taught us that no matter what you do, the scent lingers within dog fur, re-awakening every time it rained. Another time, we visited some friends who live near the Delaware Water Gap, with their Jack Russell terriers. Apparently bears don’t always poo in the woods, and one of my friend’s dogs discovered a nice fresh pile in the yard and rolled joyfully in the mess. When Pasha got a whiff of her, he must have thought, “Hmmm. Where’d you get that? Eau de Peau, yes? I must have some, too.” You can wash a short-haired little Jack Russell in the kitchen sink. Not so with an oversized, uber-furred Keeshond. 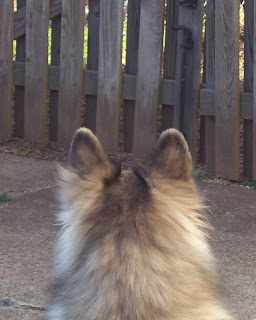 Like Kelsey, Pasha was not a fan of cats. He, too, thought they were designed to be chased. This got Pasha into trouble several times. One night, he was outside in the front yard and we think he ran across the street to chase the neighbor’s cat. The best we could figure--since nobody saw it happen--was that he then sat in the middle of the street to Ponder the Situation. Another neighbor turned the corner in his car and hit poor Pasha. He was very lucky, and escaped with no broken bones and no internal injuries. But he had seriously damaged the skin on his back, which left him with a large bald patch there for the rest of his life. It didn’t really bother Pasha, though. While the wounds were healing, he had to wear a t-shirt to protect his skin. When he graduated from that, he loved to be patted on his bald spot, and would perform a Happy Butt Dance of joy. In the summer, we rubbed his furless back with sunscreen, which Pasha thought was an even better treat. 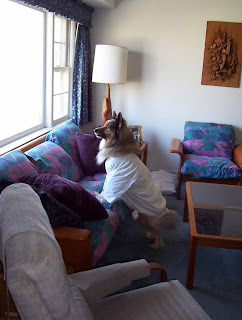 Pasha was a dog of many roles. In addition to pulling off Emo Dog, he could also channel studied nonchalance, evoking a Royal air by simply crossing his paws. 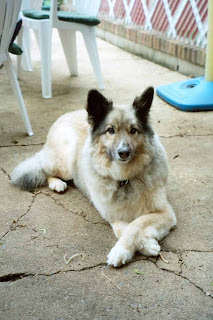 He was Security Guard, performing a perimeter check of the yard every time he went outside. 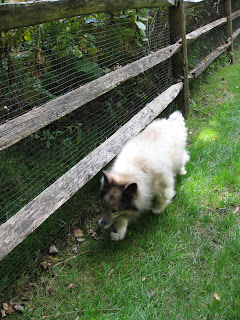 In our first house, his sacred duty was to stand guard behind the privet hedge, wait until some unsuspecting human walked by and bark a kid off his bicycle or send an elderly neighbor into palpitations. 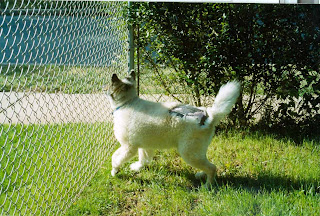 A patient dog, Pasha enjoyed Bird Watching; he would sit by our sliding glass doors and watch as they flew down to feed on the seed I would scatter outside in the winter. When a minyan of the feathered creatures had been achieved, he would pounce at the window, his tail wagging as he watched the birds scatter heavenward. And when wanted a little time and space to himself, Pasha the Spelunker would hunker down under a corner table, where he could watch everything from his Cave. 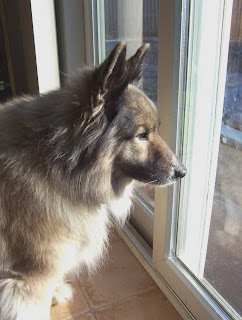 Pasha was also an Entertainer, once interrupting no less than 3 children’s soccer games in a row, by trotting onto the fields to run around with the kids. Every game came to a complete halt, while Corinne tried to corral Pasha.  He also provided entertainment for every sleepover Corinne held; Pasha would walk into the landscape of sleeping bags, position himself appropriately, and within seconds a dozen young girls would be petting him, hugging him and fussing over him. 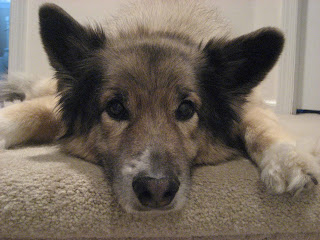 For even more pictures of Pasha, see my Picasa web album.