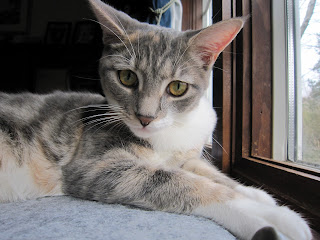 “Mep.”  That’s what Dawn says all the time. It’s an all-purpose word. It can mean, “Feed me.” It can mean, “I need a lap.” It can also be physical punctuation--a sound that adds emphasis as she lands on the chair, then the bench, then the bookshelf. And I’ve also heard it used as a curse word--actually, a string of them--when being sent to bed in the basement, unwillingly. With each step down the stairs, Dawn says, “Mep.” As in “Mep mep mep. MEP mep mep mep MEP!” I don’t need a cat/human dictionary to translate; I’m not even sure I’d want to. 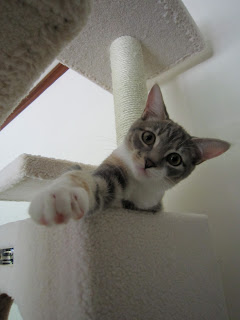 Until Dawn came to live with us, I thought cats said, “meow.” Or maybe, “mew.” But “mep?” Now her vocabulary has expanded and there are many words, but to be honest, rarely a full fledged, field grown, 2nd-grade reader “meow.”  There is “row,” “reeow,” and often just “meh.” Once, when it looked like she was about to climb up my left leg to get to the kitchen counter, I informed her that she would be a very sorry kitty indeed if she actually attempted the feat, as I had a water squirter in my hand and she would surely feel my wrath, she answered, with a tone of awe, “Wow!” 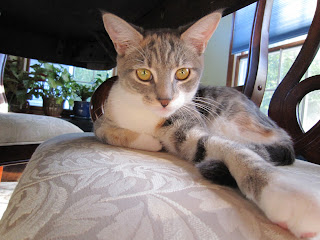 Imagine a dawn or a dusk with dark grey clouds as well as white puffy ones, and yellow and orange sun streaks through them. That’s the inspiration for Dawn’s name. When we first brought Dawn and Athena home, I went online to learn the correct words to describe their colors. Dawn is a combination tortoiseshell and tabby. However, she’s very light, which I’ve seen referred to as grey or blue. This makes her a dilute tortoiseshell tabby.  Or for short, a dilute torby. 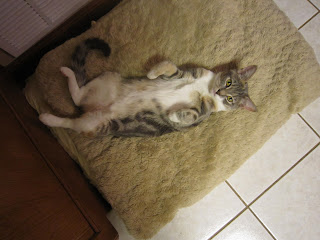 Dawn is a funny cat. Quirky. She “begs” for her dinner, standing up on her hind legs, with her front paws hanging down; she looks like a meerkat.  I will admit when she started doing it, I encouraged it, so now it’s part of the feeding routine. But the two-circle spin that must accompany “kitteh nom” time routine was not my idea. Two spins, clockwise before every meal. 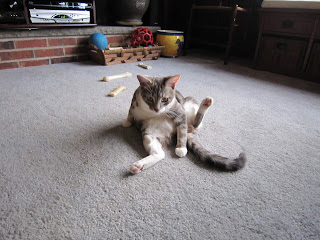 Like many cats Dawn likes to hide, and has the most satisfied look on her face when she thinks she’s hidden so well you can’t see her. Of course, most times she’s quite visible.  She’s a great hunter too, as many a stink bug can attest. Well, at least those that survived the pouncing and batting and general kitten hunt activities. And she’s good at hunting her own tail; it always seems to sneak up on her. 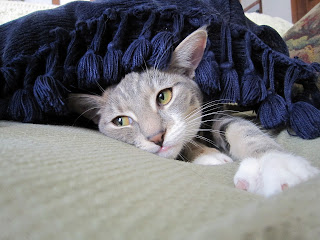 Dawn and Athena, whom we adopted through Lifeline pet rescue, are our family’s first experience with cats, so we’ve had a crash course in all things feline. Sisters, they joined our menagerie in August 2010, and are now fully integrated into the group, nuzzling the dogs, trying to eat their food, and chasing dog balls. All four animals love to watch the birdies from our family room; often you'll see cats and dogs hanging out together on the bench by the window, tails and noses twitching, and each one of them sure that he or she will get one. 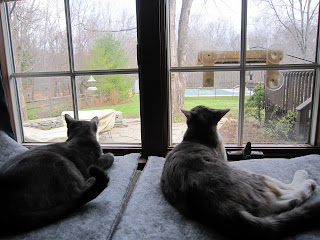