Getting to Know Tucker, Part I: Dog Meets World

It's hard to believe Tucker has been with us a mere week and a half. We're all getting to know him; we already love him. The pictures below provide a glimpse into his personality; he is mischevious, curious, funny, loving, playful, friendly and silly. 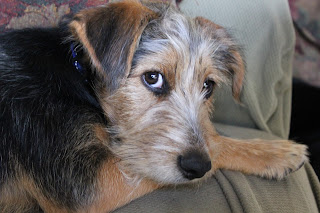 There's something about his eyes; he looks right at you and you know there's a story waiting to be told. 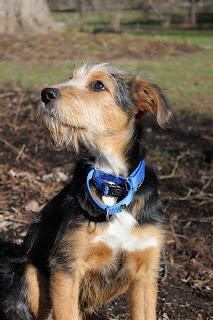 Outside, Tucker's nose misses very little. He can sit and sniff the breeze or follow a scent trail, nose to ground. 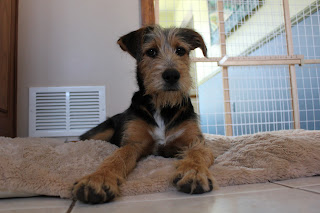 Like Jasper, Tucker is a comfort hound, seeking out the softest, cushiest spots in the house and claiming them for his own. 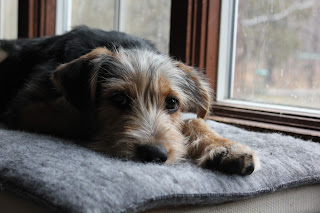 He is peripatetic pup, our Tucker, so rainy days can be frustrating as there is just not enough room in our house to run wild. Though that doesn't stop him from trying. 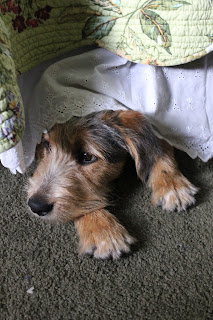 Tucker loves to explore. He followed one of the cats under our bed, and found it to be a fascinating place from which to watch the world go by. Dawn was Not Pleased. 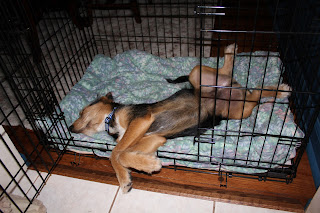 A crate is not a happy place when the door is closed, but when it's open, what a great place to stretch out and relax for a sleepy puppy. 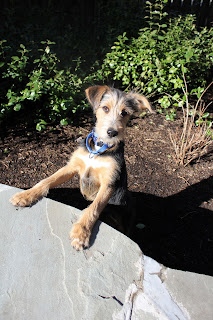 Jasper and Lilah love to jump up and run around on our shade garden wall. Tucker will join them soon, I'm sure, when he gets a little more control over his gangly body. In this picture, I swear I can hear him saying, "I'll have a Guiness." 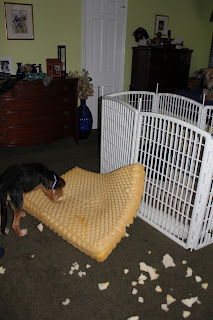 Normally well behaved, Tucker had me fooled into thinking I could leave him unsupervised while I took a shower. Jasper's bed was a casualty, but it sure was fun to shred. 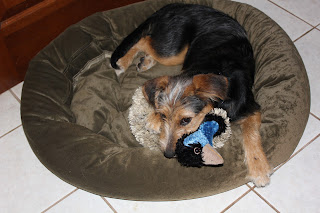 If Jasper likes it, Tucker does too. The emu is a favorite toy, and Tucker rests his head on his prize, having successfully weaseled it out of Jasper's paws. 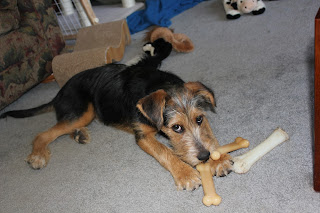 One can simply never have too many bones. 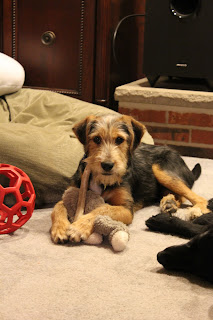 Or maybe an antler to chew on. I swear it looks like he's an old man with a pipe...perhaps stuffed with Longbottom Leaf? 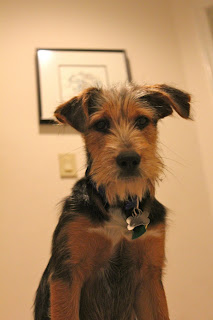 Oh, the places he'll go! We are so thrilled Tucker joined our family and are truly enjoying getting to know this awesome little guy, as we watch him grow and learn. Stay tuned for further adventures...
Posted by Life with Dogs and Cats at 9:38 PM