Gliding in the Night

As I write, I’m trying to feel the warmth of the summer evening when I first encountered my squirrelly little friends.
I always carry a flashlight when we head outside for our last excursion of the day, mostly because Lilah, the obsidian-furred Stealth Dog, disappears in the dark.  This particular night in the summer of 2010, as I walked past the tree where I keep the suet feeder, I heard a scrabbly noise, like something scratching at the bark. Without taking time to think, I swung my flashlight in the direction of the sound and saw a tiny creature sitting on my suet feeder.
It was the size of a chipmunk, with a chipmunk-sized tail, but it had graybrown fur. It's large dark eyes seemed to take up an inordinate portion of its head. Startled, the little animal scrambled up the trunk and disappeared into a crook between two branches.
What was that? I quickly ran through a list of possibilities.
Squirrel? No, too small. And squirrels are creatures of the day.
Chipmunk? Nope. No stripes. And the eyes were way too big.
Those huge eyes offered a clue; whatever I saw was nocturnal. A furry nocturnal something. So I did the obvious: ran inside, fired up the MacBook and Googled “New Jersey nocturnal mammal.”
The result? Flying squirrel. Sounds possible. So let’s try a Google image search. Oh. My. Gosh. That’s him!  Or her!
Most specifically, my visitor was a southern flying squirrel or Glaucomys volans. They live in deciduous and mixed forests throughout the eastern U.S., bunking down during the day in nests made in holes in dead trees, called snags. And it turns out, in addition to suet, they like peanut butter.
Naturally, the next day, at dusk, I slathered a glob of Skippy onto my suet feeder. That night, when I came outside with the dogs, I heard that scratchy, scrabbly noise, and there the creature was, chowing down on the brownish goo.
My new friend didn’t seem to care when I shone the flashlight on him, and Jasper and Lilah were busy chasing Sniffs in the night, so I stood there and watched him for awhile. Of course, prior to this, the only flying squirrel I had ever come close to (if one could call watching Saturday morning cartoons “close”), was Bullwinkle the moose’s best friend Rocky. It felt too easy to name my new acquaintance Rocky, so instead I decided to name him after Rocky and Bullwinkle’s arch nemesis: the Russian spy Boris.
Boris came every night after that. And within a week, there was a second squirrel. Of course, she had to be Natasha (Boris’ femme fatale partner). I took to calling out their names and making a clicking noise when I brought out the peanut butter in the evenings, thinking they might hear me and associate the sounds I was making with the peanutty smorgasbord I was setting out. Did I sound foolish? Perhaps, but my neighbors’ homes aren’t that close and I didn’t really care.
But here’s the thing; the squirrels did learn to recognize my call. Fast. And soon, I would go outside, call out, "Boris! Natasha!," click a few times...and suddenly they’d appear at the top of the tree. They had to have glided there but I didn’t hear them, and didn’t see it happen. They flew so quietly.
However, they weren't completely silent; when they weren’t floating through the air, Boris and Natasha called out in tiny voices that I could just barely hear. They made high-pitched little squeaks, chittering batlike noises that seemed to come from all over the yard. And, then one night when I was simply standing there watching them and grooving on the concept of flying squirrels simply existing, let alone eating from feeders in my yard, a shadow swooped over my head and landed with a little up-curve on the trunk. I saw it glide!
And what's this...there are three?  No wait, there’s another one. Four? Five?
Throughout the summer, they came. My husband and children and I would head outside at dusk; I’d call out for Boris and Natasha, clicking as I spread the peanut butter on the suet feeder--and in a new feeder I put on the tree specially for the squirrels and their friends and family. They’d glide soundlessly over our heads and flit from branch to branch on my split-trunk tree. In flight, they looked like square furry washcloths, with tiny paws at each corner, a head centered on one edge and a tail in the middle of the opposite side. The creatures pinballed back and forth among the tree limbs. Friends would stop by to see the show. At a family reunion (human, that is: my relatives), an entourage of cousins watched in awe as I called the creatures and they came swooping in to eat and play.
Every night I put out peanut butter and made sure the suet feeder was full. However, as fall approached and the nights got colder, there were fewer squirrels.  And then they simply stopped coming. For a while I thought perhaps they hibernated, but apparently, these guys don’t go in for the long sleep. I worried that something happened to them; often I’d hear the call of a screech owl at night and hope that southern flying squirrel wasn’t on the dinner menu.
Eventually, I stopped putting out food.  I figured I had my once-in-a-lifetime encounter with these unique animals. I felt incredibly lucky to have had the opportunity to watch them glide and soar in the nighttime sky.
And then, a few nights ago, I was outside with the dogs, and I heard the familiar scrabbling sound. My flashlight revealed a tiny furry creature with big eyes sitting on the suet feeder.
Welcome back, Boris. Time to buy the economy jar of Skippy. 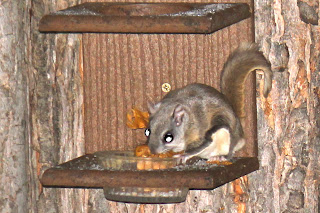 Boris eating from the peanut butter feeder.
Posted by Life with Dogs and Cats at 7:05 PM