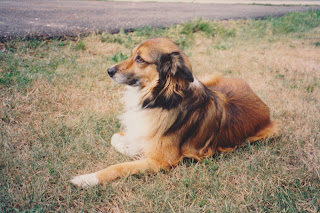 It was probably not the best way to pick out a pup. My husband at the time wasn’t too keen on having a dog, so I thought if he made the choice, he would be more likely to warm up to the idea. At the shelter, there was a litter of what looked like sheltie mix puppies: tri-color fur, thin pointy snouts, floppy ears. “This one is the least stupid-looking,” he said.
Of course, to me, they were all beautiful, and I would have taken any one of them, but Least Stupid Looking came home with us. It seemed to take forever to name her, as my then-husband nixed every idea I came up with. As a last resort, I took out our atlas and started looking at places with names beginning with the letter K. Don't ask me why, but for some reason, in my synesthetic brain, she looked like a K dog to me. After reading out a long list, I finally got to Kelsey Lake, Ontario. “Kelsey.” I looked up. “That’s better than the others,” he said. Kelsey it is! 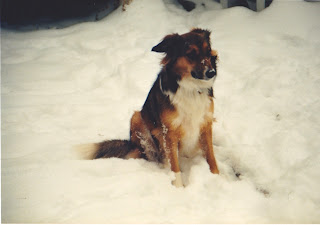 As Kelsey grew, her fur became longer and silkier, and she looked more like a small collie.  Bigger than a sheltie, she had longer ears, and some of the markings of a German Shepherd.  We used to play a game with her we called Shepherd, Collie, Hound. If we held her ears up so they were pointy and tall, she looked just like a German Shepherd. If we flipped the ends down, it was instant collie. And let her ears fall all the way forward, they flopped like those of a hound. 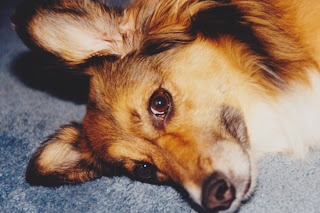 Though my family had a dog when I was growing up, Kelsey was the first I had on my own. A very smart dog, she learned fast. She understood where the edge of our yard was and never crossed from the driveway to the sidewalk without permission. She always went to the bathroom in a specific section of the yard. And she learned to walk without a leash, no matter what the distraction; I felt safe calling her back to me, knowing she would come even if a rabbit was zooming off in the opposite direction. 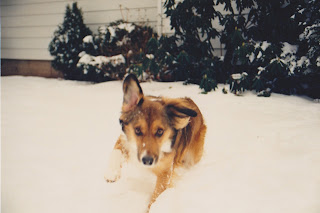 Kelsey was part of the family before we had children, and she was fascinated when we brought our daughter Corinne home for the first time. Never sure that we were paying enough attention, Kelsey would come running to us every time the baby cried. Every time. In case we didn’t notice. And she supervised every diaper change.  Later, Kelsey realized that feeding time was snack time, as Corinne truly enjoyed experimenting with gravity, amazed at the fact that if she dropped a Cheerio from a high chair, it would fall to the floor. Or land on Kelsey’s back as she was snarfing up the previous prize.


When she was older, Corinne loved to play dress-up, and had a whole shoebox full of Mardi Gras beads and plastic bracelets and frilly ribbons which she used to adorn the dog. After about 20 minutes, poor Kelsey would have several bracelets on each of her front paws, and dozens of multicolored beads around her neck. I’d stand by, and when it looked like the dog had had enough, I would tell Corinne it was time to give Kelsey a break. After all the jewelry was removed, Kelsey was given several treats as a reward. Everyone was happy. 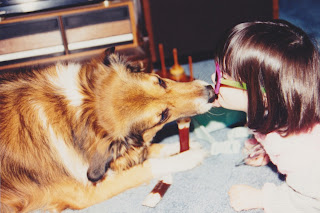 While she had plenty of toys, Kelsey’s favorite outdoor activity was chasing sticks. A ball was fun, but a stick was better. She would run through the yard with the stick, bringing it back for us to throw or leading us in a merry game of You Can’t Have My Stick. As smart as she was, though, Kelsey never realized that when carrying a stick, the ends of it, well, stick out--wider than her body. So, if she ran between two people with the stick in her mouth, she created a live version of a Saturday morning cartoon, taking out two humans at the knees as she came to a screeching halt. 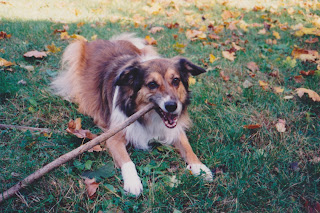 Perhaps inspired by Kelsey’s fondness for sticks, Corinne had a favorite Stick, too. She would totter around the yard holding her stick and pointing at things, conducting the world as only an 18-month old child can. Corinne loved her Stick and it took a lot of convincing to make her leave it in the garage every night instead of bringing in the house with her.  We put Stick to bed every night in a wagon, and it was the first thing Corinne looked for when she next went outside.  Kelsey didn’t quite get the distinction between her stick and Corinne’s, so there were several tug-of-war sessions, with an increasing note of panic in Corinne’s, “NO!” Usually I could distract the dog with a different stick and all was right with the universe. 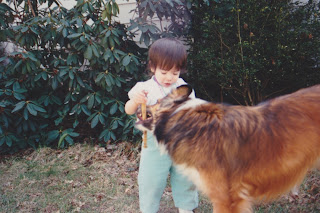 Kelsey was the first of our dogs who thought cats were Evil, and Must Be Chased. Several of our neighbors had cats, and it was Kelsey’s Job to make sure our property was free of them varmints. Once, I opened the front door and she nearly flew out, leaping right off the porch, aiming straight for the mimosa tree that was in our yard. That’s when I noticed there was a grey cat crouched on the ground. As Kelsey ran at it, the poor thing didn’t move. The dog skidded to a halt. She looked at the cat. Looked at me. Back at the cat. Back at me. “Um, it’s not running.” Cats run. Dogs chase. This is the Natural Order of Things. Kelsey was perplexed. She didn’t know what to do. Of course I realized at once that the cat was probably hurt or sick, so I sent Kelsey back into the house, and went over to check on Pussywillow. Which became her name when my parents adopted her as their first cat.
Indoors, Kelsey had a favorite Thing. It was, for all intents and purposes, a rawhide bagel. We called it her Circle Bone. And it was Very Very Special. Several times a day, particularly when she was nervous or excited, she would go get her Circle Bone and wander the house trying to find the Right Place to Put It. Because it had to be Just Right. Hidden, but not so she couldn’t find it again. Not really buried (we were inside, and that would have been a challenge), but perhaps placed underneath a pillow. She didn’t like anyone watching, and if she thought you saw her hide the Circle Bone, she’d pick it up and hide it again somewhere else. If you did happen to catch her hiding it without her knowing, you’d see that she would place it ever so gently in the chosen spot, and nose imaginary dirt over it. Sometimes she slept with it next to her on her dog bed. 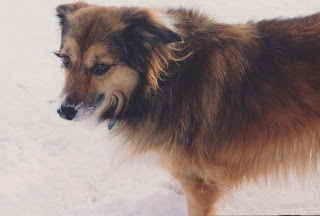 When Kesley was older, I thought it might be fun to have a second dog, but I didn’t go out looking for one. Instead Pasha found us (to be covered in another entry.) While Pasha and Kelsey didn’t become the best of friends, they enjoyed each other’s company.  Feeding time with the two of them was an amusing ritual; I fed each dog the exact same food on either side of the refrigerator, so they couldn’t see each other. Invariably, halfway through a meal, one of them would sneak off, then the other, circling through the family room and living room, until they were each eating the Other Dog’s food. But then the Other Dog still had the better food. And then Bowl Switch would happen again. It's amazing how the Other Dog always had the best meal. Every time.
Posted by Life with Dogs and Cats at 8:16 AM