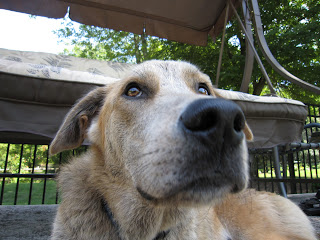 Wherever we go, the response is nearly the same. What kind of dog is he? Jasper draws stares, comments and tons of compliments at the dog park, pet store and vet's office. A very leggy dog, Jasper brings to mind the AT-AT battle walkers featured in The Empire Strikes Back.  (My inner geek is showing,  I know.)  Guesses as to what his background is include lab (based on his webbed paws and body shape), German Shepherd (there's a hint of a black saddle on his back, but his fur is softer and shorter than a shepherd's), and catahoula cur (he has some kind of hound markings and a baying voice when he's on the trail of something.) Jasper is all the colors of the desert; or perhaps the bright warm tones of an exotic spice market: cinnamon, cocoa, nutmeg, cloves, ginger, sesame, salt and pepper.  Imagine a slightly stocky foxhound with some of the colors of a German shepherd and a speckled black and silver face. 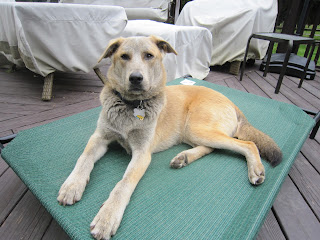 His color inspired his name: if you're familiar with the stone jasper, specifically a type called picture jasper, then you can visualize our friend. His name had a dual meaning; one of our family's favorite authors is Jasper Fforde. As for Mr. Jasper, he truly is a handsome, striking dog.  Luckily he can't understand what people say about him or he'd become quite vain. 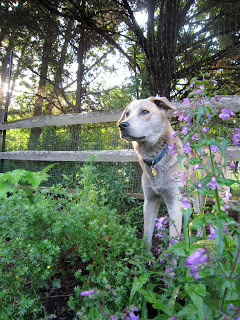 Just like Lilah, Jasper came to us from a kill shelter in Louisiana, through Husky House, and a local foster parent. Jasper and Lilah view themselves as brother and sister, though they obviously came from different litters. (Lilah is about a month and a half older than Jasper; our best guess at Jasper's birthday is late May of 2009.) 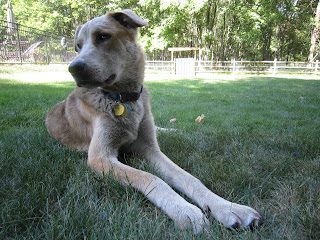 In our home, Jasper is referred to as the Dude or simply Himself. Sometimes he's just a Moose or a Pony; he's a very tall dog. He is the most laid-back dog I've ever known.  Nothing bothers him. Nothing. You can use him as a pillow. You can play drums on him (as my 16-year-old son does).  You can pat him on the head, sniff his paws (they smell like popcorn, I swear) or muss with his ears.  He just moans or sighs (that's the shepherd coming out I think) and continues to relax. Maybe he stretches his long, lanky body so that he seems to extend 10 feet. He embodies the character in The Big Lebowski: Jasper, the Dude, abides. 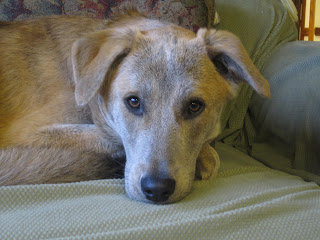 Jasper is smart, and is incredibly food motivated.  He'll learn any trick in minutes once he realizes there's a Snack involved. And he'll go through his trick repertoire one after the other trying to figure out just what I want him to do because there's a Treat at the end. Like Lilah, he took agility classes, and he loved it; with a grace we wouldn't have guessed he had, Jasper figured out how to make his long, leggy self jump through hoops, run through tunnels, and turn around on the doggy equivalent of a balance beam. 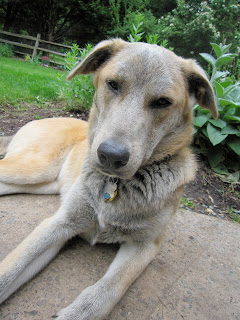 Everybody is Jasper's Best Friend.  Everybody. Whenever he sees a human of any shape, size or age, he turns into a mushy puppy, his entire body wagging as he bows an invitation to play. It's the same enthusiasm whether he sees the UPS man, the jogger that runs by in the park, everybody in PetSmart, and that person getting into the car across the parking lot. For some reason, not everyone takes him up on his offer to play and be Best Friends. When this happens, Jasper stops wagging, looks heartbroken for about 3 seconds as he ponders why oh why this person didn't play with him, and then he sees someone else or finds a good smell or looks for a treat and all is forgiven. When we go to the dog park, Jasper spends most of his time running from person to person, snuggling up to them as if he belongs to them, and of course they ooh and ahh and give plenty of pets. Everyone at the dog park is Jasper's Best Friend. 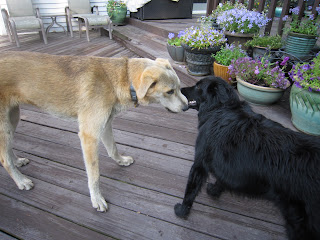 As mentioned in the overview of Lilah, Jasper and his sister love each other very much, and it is a blast to watch them together. They share everything: toys, beds and bones. Jasper plays the part of the goofy younger brother; he loves to jump at Lilah to get her to play, and then watch her zip circles around the yard.  He'll pounce at her with each circuit, but surely you don't expect him to run All Around the Yard with her?! Jasper will, on occasion, chase a ball or a Frisbee, but really, he'd rather just stand there and have me throw it to him; he will catch it with a laconic air and then trot it back to me.  More often he looks at the ball when it's thrown, and then looks back at me, asking, "Um, if you WANTED the ball, why the heck did you throw it over THERE?"
Posted by Life with Dogs and Cats at 8:06 PM

Email ThisBlogThis!Share to TwitterShare to FacebookShare to Pinterest
Labels: Jasper